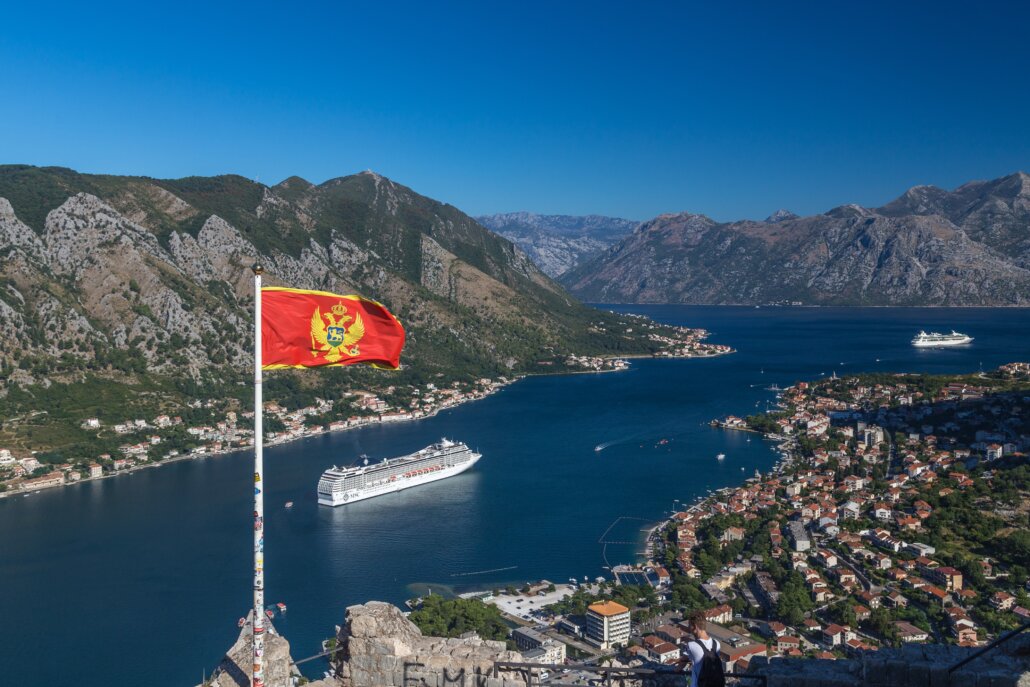 Montenegro is a small country with a long tradition, a crossroads of different cultural and religious influences, on the border of East and West; today, Montenegro is a multi-confessional and multi-ethnic country, known for its tolerance and harmonious relations between its peoples.

Traces of human presence in the area of today’s Montenegro date back to the Paleolithic, as evidenced by the archaeological site Crvena stijena (near the village Petrovići, Nikšić municipality). The first known ethnic groups, numerous Illyrian tribes, lived here between the fifth and second centuries BC. After that this area became part of imperial Rome and its province of Prevalis, as evidenced by many urban-type settlements that formed around the former Illyrian settlements: Dioclea (Duklja), Municipium “S” (Pljevlja), Medeon (Medun), Butua (Budva), Olcinium (Ulcinj), Risinium (Risan) and others.

After the fall of the great Roman Empire, the area of the province of Prevalis became part of Byzantium, whose borders were occupied by the Slavs in the middle of the 6th century. It took several centuries for the Romanized indigenous population to be assimilated by the baptized Slavs. During the 9th century, the first state organization was created, whose core strengthened during the time of Archon Peter, and from the end of the 10th century, during the reign of Prince Vladimir, it became known as the Slavic Dioclea, which has carried the name Zeta since the 11th century. During the Vojislavljević dynasty (XI – XII century), Vladimir’s Zeta became a kingdom, with its own church – the Bar Archdiocese. At the end of the 12th century, the territory of Zeta was under the rule of the Serbian dynasty of Nemanjić. With their influence, orthodoxy is strengthening in the then Catholic Zeta, but the archdiocese established by the dynasty Vojislavljević continues to this day.

In the second half of the 14th and during the 15th century, Dioclea-Zeta restored its state sovereignty, and feudal families took over the power. From the 15th century, Montenegro has been ruled by the noble families of Balšić and Crnojević. New political and historical circumstances arose with the appearance of powerful Ottoman conquerors who at that time unstoppably penetrated and conquered southeastern Europe. A centuries-long battle will be fought against them, which gained full strength from the moment when the tribe Petrović took over the Montenegrin tribes, with the power of the cross and the sword. At the Berlin Congress in 1878, Montenegro became an internationally recognized state.

After the First World War and the fall of the Petrović-Njegoš dynasty, Montenegro became part of the newly formed South Slavic states – the Kingdom of Serbs, Croats and Slovenes, and afterwards the Kingdom of Yugoslavia. After getting back the part of the state sovereignty after the Second World War, Montenegro had a status of a republic, and was a federal member of the Federal People’s Republic of Yugoslavia, the Socialist Federal Republic of Yugoslavia, and the State Union of Serbia and Montenegro.
By a majority decision of the citizens, Montenegro restored its independence on May 21, 2006 and became an internationally recognized state.

Montenegro is located in Southeast Europe, on the Balkan Peninsula. It borders Croatia to the west, Bosnia and Herzegovina to the north, Serbia to the east and Albania to the south. The Adriatic Sea separates it from Italy. The length of the land border is 614 km, and the length of the sea border is 293.5 km.

The climate in Montenegro is complex, which is conditioned by the latitude, the proximity of the sea, the relief and the position of the mountain massifs next to the coast. There are several climate zones: Adriatic-Mediterranean in the south, variable Mediterranean in the lowland part of the country (Skadar basin and plains), moderate continental in the valleys and dales and sharply mountain climate in the mountainous part of the country.
The average temperature: 27.4 ° C (summer)
The longest beach: Velika plaža 13.000 m
The deepest canyon: Tara river 1,300 m
The largest bay: Bay of Kotor
The largest lake: Skadar Lake 369.7 km2 (147.9 km2 belongs to Albania)
The highest peaks: Bobotov Kuk (Durmitor) 2,522 m and Maja Rozit (Prokletije) 2,522 m
National parks: Skadar Lake 40,000 ha, Durmitor 39,000 ha, Biogradska gora 5,400 ha, Lovćen 6,400 ha

Montenegro signed a Stabilization and Association Agreement with the European Union in 2007 and joined World Trade Organization in 2012. Montenegro has started negotiations for the accession to EU in 2012 and successfully opened and closed a great number of Chapters, and is expected to become the next EU member.

The industry is based on existing resources, with the largest share coming from the mining-energy-metallurgical repro-chain. In a relatively small area, there are significant amounts of bauxite, coal, lead, decorative stone, etc. Coal sites represent a significant energy potential. Montenegro has the capacity to produce crude steel, red bauxite, alumina, aluminum, sea salt, coal.
As far as power capacities, Perućica and Piva hydropower plants, and Pljevlja thermal power plant produce about 3 billion kWh per year.

Maritime sector has a long tradition, and there are prerequisites for the development of the maritime economy. The port of Bar is the largest Montenegrin port, located at the gates of the Adriatic Sea and is capable of handling 5 million tons of goods per year. In the vicinity of the Port of Bar, there is a Free Customs Zone, which provides opportunities for the development of production and service capacities for the construction of warehouses, from where the goods can be easily transported by sea or rail to the north. In addition to the Port of Bar, other ports of Kotor, Risan, Zelenika and Budva have much smaller capacity and are intended primarily for tourist activities.

Montenegro is ideal for developing all types of coastal, mountain, health, religious, rural and congress tourism. In the years after independence, Montenegro has seen a rapid increase in investment in tourism, primarily along the Adriatic coast. After the real estate boom of 2006 and 2007, when foreigners bought most of the real estate along the coast, the Montenegrin real estate sector slowly cooled down. Despite this, the World Travel and Tourism Council again ranks Montenegro among the top destinations in the world.

For information on GDP and other economic parameters, please visit: https://www.monstat.org/eng/index.php

The geographical location of the country, 200 km of beaches and a wide variety of cultural, historical and natural resources, such as high mountains, deep valleys, glaciers, diverse flora and fauna – all make Montenegro a special and beautiful Mediterranean country.

In this small area you can find medieval towns with exceptional architecture and culture, beautiful beaches, picturesque harbors, the largest lake in the Balkans, swift rivers and the deepest canyon in Europe, unspoiled nature of national parks and wild forests, spectacular mountains, amazing scenery, cultural and historical sights, ski resorts and much more.

Indulge in the hospitality of Montenegro

The most popular tourist destinations in Montenegro are:
• Sveti Stefan: once a small fishing town that has undergone a transformation and become one of the most prominent tourist destinations in Montenegro;
• Bay of Kotor: one of the deepest and longest bays of the Adriatic Sea, also called the longest fjord in Europe;
• Budva: Budva beaches are popular with tourists. The peninsula boasts 21 km of coastline and 17 beaches;
• Cetinje: old royal capital;
• Durmitor: a mountain massif and the name of a national park that includes the highest peak of Montenegro – Bobotov Kuk, the canyon of the rivers Tara, Sušica and Draga and the upper part of the canyon valley Komarnica;
• Lovćen: Lovćen National Park with its center in Cetinje;
• Ostrog Monastery;
• Old Town of Kotor: one of the best-preserved medieval towns in the region and is part of the UNESCO World Heritage Site;
• Ulcinj and Ada Bojana: the beaches of Ulcinj and Bar are considered the most beautiful beaches in Montenegro. At the very end of Velika plaza in Ulcinj is the river island of Ada Bojana.